Welcome to spring in the land of coronavirus!

Well, many of you are sitting around your domicile wishing you had something to do and voila! – the call is answered.  We (the royal we) are re-releasing my first-ever release, from 1983, remixed, remastered, re-whatever, with twenty-one period-appropriate bonus tracks. There is enough fun and variety on this release to spice up any self-isolation-house-quarantine! You can dance! You can sing along!

The folks who make our discs in LA are closed for who knows how long, so we are releasing this initially  as download and CDr preorder. If you are like me and want a beautifully packaged disc, order now and we’ll get you the download and will send the gorgeous 2-disc set as soon as it comes in. Twice as much fun. If you say downloaded ones and zeros are all I need to float my boat, well, you are all set.

So, here’s the scoop. The lowdown.

Fall 1983. That’s when Truth or Consequences originally came out. Truth (GM002), along with the same-day-released compilation, Local Product (GM001), was my first music available to the public in record stores. Not my first recorded music – The Adults/Colorplates - Agony & Ecstasy (GM1017) predates this, but was not unleashed until thirty years after the fact. The music on Truth followed in the ashes of that band; this was truly my entrance into the recording life. The first two songs on the album were recorded in 1982 at a real 16-track studio, Triangle Studios, with The Enemy’s Peter Barnes on drums, The Cheaters’ Al Bloch on bass and The Pin’s Pat Hewitt engineering. It was exhilarating.

From there I bought a 4-track Teac 2340 reel-to-reel and the results are pretty much what you will hear on this expanded ToC, all recorded from ’82 thru early ’85. Three songs, “Get Modern,” “Sheila” (basically demos for my second and pretty much overlapping band, The Icons) plus “A Pearl” were done on the 8-track Tascam 38 reel-to reel that replaced the Teac.

The original ToC had eleven songs, Side A the darker rocking songs – with real drums, Side B the more whimsical pop side with programmed fake drums - the eternal Dyer dark-shit/weirdo-pop song dichotomy set in motion. The two sides of the cassette are presented in their original order as the first songs on each of the two discs (if you have the download “On TV” starts Disc B). The Dichotomy is mostly observed for the remainder of each side.

I’ve thought about re-releasing Truth for some time. A few of these tunes popped up on my Songs From Academia Part 1 & 2 as well as the It Crawled from The Basement comp in 2009. Most have not been heard beyond friends and the few bold people that bought this stuff at Cellophane Square in the U-District (Seattle) or through the mail back in the day. This is not simply the original eleven songs – there are an additional 21 songs. A few were tracks with vocals released on the largely instrumental I Lived Three Lives (GM005) (most of the instrumentals appeared on Academia Vol. 2), a couple appeared on Local Product. The rest are period recordings that for better or worse make their first appearance here.

I am not a purist in my approach to presenting these songs, in mastering (and in several cases, baking old tapes and remixing) I just tried to make them sound good using the tools I have today. I didn’t re-record anything – the performance remains stock! 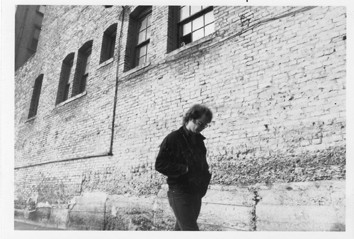 In the process, I discovered a song “Sports Action,” that I never had even finished. I am guessing that it got left behind in the transition from 4-track to 8-track. Only problem, it was lacking a chorus vocal. Oops. Then came the proverbial miracle of Saint Les Paul, the inventor of multitrack recording. While going thru tapes looking for something else, I found an isolated chorus vocal for the song and was able to fly it right into Pro Tools and finish it up 35 years later. Snappy!

I will say, having dug through the past and reshuffled it the last few weeks, I’m pretty happy with the result. These tracks certainly don’t sound like fancy modern recordings, but I think they capture the essence of where I was at in 1983 in a pretty pure manner. I hope you enjoy them.

I am not going to be playing these songs in public or on one of those internet shows that are everywhere since Covid-19 came to town, though shockingly, I can still play most of them after not having done so for thirty-seven years. Okay, I might hum a few bars of F.O.A.D. if you send me a Zoom meeting.  Howie and I are going to try and knock out a video or two in the next couple weeks, so stay tuned for that.

For those of you that have been tuning in to my Wednesday 1:00 pm radio show FreeForm Northwest on KAOS 89.3 FM Olympia kaosradio.org, it has been off the air for the last three weeks as The Evergreen State College is closed and pre-programed playlists are filling the KAOS airwaves. The earliest live shows will be back on the air is April 26, I will let you know when we return to action.

Work on the Olympia album has ground to a halt as we are in house arrest or whatever it is called and The True Olympians are on hiatus for a bit as a result (I’m sure they are practicing the songs in their minds – the Professor Harold Hill method – in preparation for our recording sessions). A few weeks before the plague hit, Sally Barry took over the drum throne. You all know Sally from her Sally Barry – Renditions album we released last year, where she was the singer. Sally is in fact a mean drummer and we are looking forward to getting back to work and in the studio. I’ve been slacking on completing new Olympia songs while I have been finish Truth, but I have 14 songs written and another 3-4 half written – it’s gonna happen!

I am quite happy to tell you we will have a second album from Dante and Eros titled Mirage being released May 1. I think this album is definitely a step forward from their first and features their own compositions. They are subject to the same manufacturing issues, so it will be download only to start – we will keep you posted on hard copies. We will be releasing an advance digital single, “I Want To Build,” April 11 and they are planning an online concert for the release. More about that when we have info.

I am also privy to the totally rocking tunes coming to you on the all-new yet-untitled Al Bloch album. Al stormed into town about a month ago and recorded 12 songs at brother Kurt’s studio, Strictly Vintage, (KB also strums and plucks the guitar melodically) and I can tell ye they are tasty indeed. Al sez: “New Al Bloch album with 12 original songs that run the gamut of contemporary musical styles.  Sure to please all ages from 8-80.  Produced by Kurt Bloch, and featuring Kevin Fitzgerald, and the Fastbacks on one tune.” We don’t know the exact date they will wrap yet, but it won’t be long. Pretty exciting indeed.

That’s all we got for the moment, sailor.  Be safe. Wash your hands,

All songs by Tom Dyer © Half the World Publishing.

From ‘83: Special Thanks to Peter Barnes, Pat Hewitt, Christy Cronn for services beyond the call of duty, and most of all, Vicki Dyer, who made this whole project possible.

2020: Thanks to Howie Wahlen for keeping the motor running, Thanks to Jack Endino for the loan of the 4-track machine. Finally, a special thanks to my dear mom JoAnn Dyer, who has always supported my necessary din.