REDS Band will release their debut CD in stores and online on Friday  September 21. To get that ball rolling they will play a record release show Friday, September 7 at 7:30 at Olympia institution Traditions Fair Trade, at 300 5th Ave in Olympia. 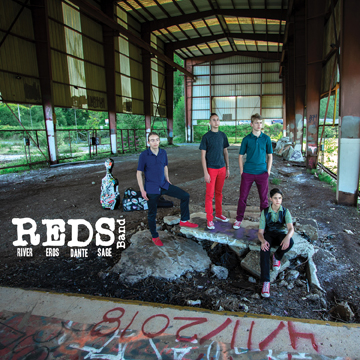 REDS Band is a talented and energetic teen folk quartet from Olympia, Washington. On their self-titled debut, produced by fiddle virtuoso Lisa Ornstein, they play fiddle music of Scotland, Ireland, Canada, Scandinavia, and America with verve and conviction.

The band members, bothers Dante and Eros Faulk plus brothers River and Sage Scheuerell, have been friends since childhood. They started their musical journey in contemporary and classical music but have come to love and share trad music in its many varieties and styles. The lads play traditional tunes, original compositions and develop intricate arrangements for their take on traditional classics. Their norm is two fiddles, guitar and cello, but on their debut album, they also play bodhran (Irish drum), mandolin, bouzouki, shruti box, and foot.