Another month has arrived in the relentless drive to 2020. The pedal is mashed to the floor. The volume is at 11. How is this possible?

Well it is. So let’s get rolling.

First up, Toiling Midgets – Sea of Tranquility. Vinyl long player. First all new-ish album since a long time ago – maybe 1992. I dunno. First GMR release.  Pretty damn great. If you like electric guitars. I do.

Toiling Midgets and Green Monkey Records are certainly pleased to announce the release of the new LP, Sea of Tranquility(vinyl LP and download),  a record informed by the past but created looking to the future. The album is reflective of much of their experimental, psych/prog/jazz/punk/post-punk/noise rock work over their 40-year history. It is largely the work of the two main surviving group members, Craig Gray and Seattle-native Paul Hood. Sea of Tranquility includes new material developed by Craig and Paul using vocal outtakes from the late Ricky Williams plus music composed and recorded for this project with singer/bass player Simon Bell, and mixed by Michael Davidson in Seattle. Also making an appearance on the record is Penta Swanson, graciously lending her voice to one summer psycho drama!

Originally formed as an instrumental trio, the Toiling Midgets were born in 1980 from the ashes one of San Francisco’s first punk bands, Negative Trend, with founding members Craig Gray – guitar, Tim Mooney – drums and Nosmo King – bass. A young Paul Hood who had honed some chops as a bass player in Seattle punk bands Meyce and The Enemy, joined in short order, switching to improvised and often lyrical feedback guitar. The unpredictable wild man, Ricky Williams, completed the original line up with his Bowie/Iggyesque free form vocals and lyrics. This new record (and make no mistake, this is new stuff) stands proudly with the other 16 or so EPs and albums that they have released over their 40-year recording career. Straight up! There will be an official Toiling Midgets Sea of Tranquility LP Listening Party at Georgetown Records 1201 S Vale St Seattle next Friday from 7-8:00 PM - should be plenty fun. Finally, Paul wants you to remember to play this at maximum volume. Be an ear bleeder.

THERE’S A WRI-ETTE FOR REPRODUCTIVE RIGHTS GOING ON

Our old pal Zelda Starfire (a.k.a. Sandy) and her partner in crime Christine got in touch with me a few months back about helping out with a benefit show they were going to do. Sure sez I. As a result:

The women of Wri-ette, in partnership with Black Lab Gallery and Green Monkey Records “invite you to Wri -ette with us using our right to free speech and our love of local art and music!!” 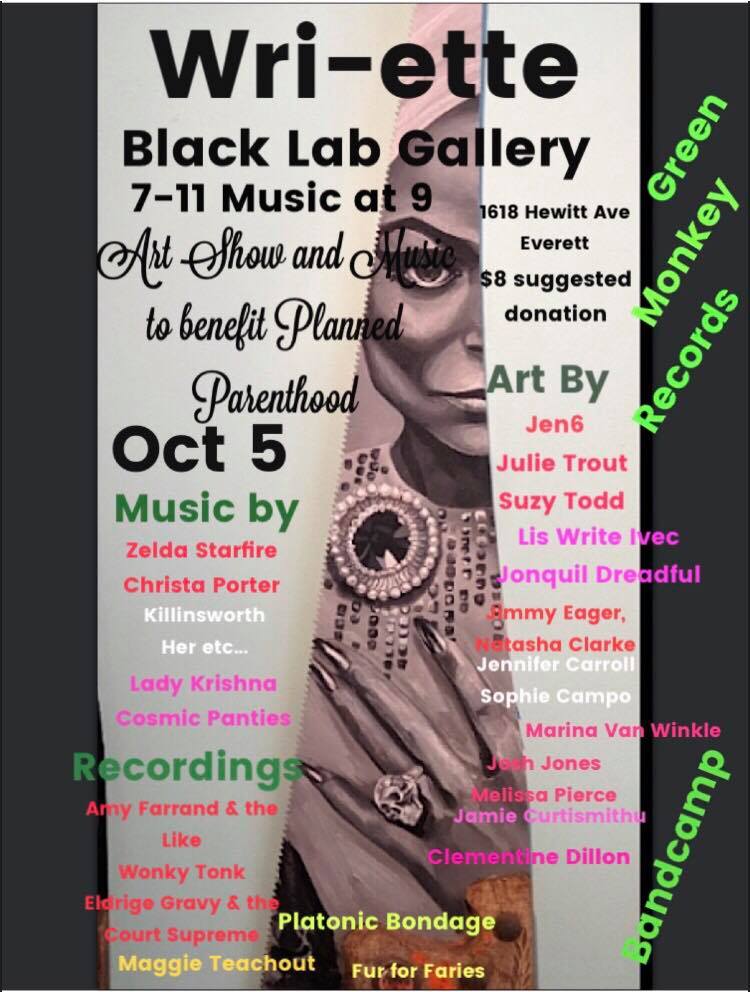 Organizers Sandy and Christine: “As Women’s rights to control their bodies are under attack, We choose to fight for our constitutional rights in courts, in state legislatures, at the ballot box, and in the streets with Music and Art. To Wri-Ette in our most authentic way- art music and community- to strengthen and give voice to women whose rights are limited, threatened or stripped away.” Wri-ette is a Pop up Art show, a live music show PLUS a music compilation to benefit Planned Parenthood! The basics: Saturday, Oct 5, 7:00-11 (music starts at 9) Black Lab Gallery - 1618 Hewitt Ave, Everett with an $8 suggested donation at door. The same day a 14-song compilation by women will be released on Green Monkey both for download and streaming through all the usual sites. Proceeds from art sales at the show and compilation sales will go to Planned Parenthood.

The comp include GMR Superstars Maggie Teachout and Fur For Fairies. I think it is a most excellent album.

Artists on the album: Zelda Starfire, Eldridge Gravy and the Court Supreme, Love and Fury (starring my pal Gretta Harley), Christa Porter, Maggie Teachout, Her etc., Amy Farrand and the Like, Fur For Fairies, Wonky Tonk, Platonic Bondage, Killinsworth, and Lady Krishna’s Cosmic Panties. A righteous time will be had by all!

The onslaught of Jeff Kelly/Green Pajamas vinyl records continues. There is a 2 LP version of The Green Pajamas – Phantom Lake: Northern Gothic 3 with a whole new cover and a pile of previously unreleased bonus tracks put out by Sound-effect Records in Greece. It’s great and our first album on a Greek label since the '80's. Feels like home! Quantities are limited - buy it today! Our pals at Sugarbush Records in England have recently put out Jeff’s Beneath The Stars, Under The River and the Pajamas’ Poison In the Russian Room on ye olde LP. We will have copies for sale here at GMR shortly. Who can even keep track?

Next month we will be releasing The Richard Peterson Orchestra – Seven. It is super-duper. A Pacific Northwest treasure! Green Monkey is the new kid on the block when it comes to Team RP, but we are most pleased to step up and take our turn. I am working on making Richard’s whole catalog available and I will let you know how that goes. There two record release shows in the works, one in Seattle and one in Olympia – I will update you when I have the deets.

The brothers have an IndieGoGo campaign going to raise funds for their second album – you can get on board right here: https://www.indiegogo.com/projects/dante-eros-faulk-new-album

I just wanted you all to know the Green Monkey is going to release the most new stuff this year that we have ever done in a year. Ever. Twelve albums. Some singles. Plus Green Pajama vinyl reissues.  Not to mention the large amount of Jeff Kelly/Green Pajamas catalog that we have taken over this year and are painstakingly getting back out to you. Just in case you didn’t notice here’s the album list.

That is all I gots for September.