THE STATE OF THE NORTHWEST PACIFIC (2022): People, places and some capital songs

THE STATE OF THE NORTHWEST PACIFIC (2022): People, places and some capital songs | Elsewhere by Graham Reid 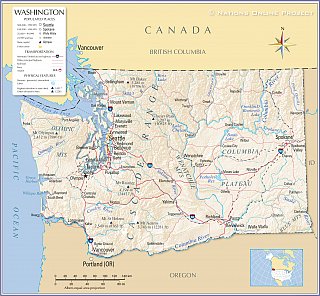 “Team One, your time starts . . . now! What is the capital of Washington state?”

“That’s incorrect. Team two, the question goes to you. The capital of Washington state is . . .?”

Unless your specialist subject is American state capitals or the life of Kurt Cobain, the name of Washington state’s capital would probably elude you.

But now Tom Dyer of the reputable Green Monkey label is going to make sure you don’t forget the name of the city he grew up in before he moved to the University of Washington in Seattle where he graduated with a degree in communication, became the academic director at the Art Institute of Seattle and founded Green Monkey.

His label has recorded recorded some of Elsewhere’s favourite albums by Green Pajamas (and Pajama-man Jeff Kelly‘s solo work), the eccentric Jim of Seattle, garage-band the Queen Annes and of course Dyer’s own bands.

And it is with one of those bands (and many fellow travelers) who come together for a triple CD salute to the capital of Washington state: Olympia.

Olympia: A True Story by Tom Dyer and The True Olympians is an ambitious and loving look at the history, architecture, local events, quirky people and interesting places in this city (pop about 58,000) which is 100km southwest of Seattle. 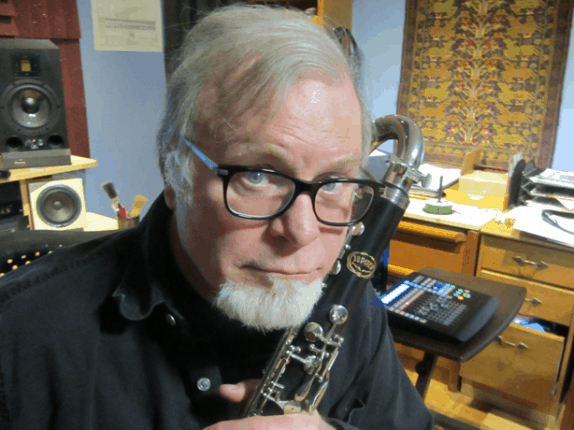 It’s where Cobain lived for a couple of years until 1991 and wrote a substantial wedge of Nirvana’s early songs. For a period Dave Grohl was his roommate in the apartment on Pear Street.

But Dyers’ triple set mostly sidesteps these counter-culture landmarks in favour of that “true history” of a city he only really discovered when he moved back there, as he explains in the excellent 80-page booklet of lyrics, images and explanations which comes with the box set.

The album opens with a spoken word and choral piece (arranged by Jim of Seattle) to acknowledge the traditional home of Coastal Salish people (People of the Water) and then comes It’s the Capital which opens with “In 1889, Washington, a territory no more, now a state. The territory’s capital had been Olympia and that is quite exactly where it stayed . . . “

And then the jaunty parochial pride comes through: “It’s the capital, ain’t in Seattle/ain’t in Vancouver/ain’t in Tacoma, ain’t in Spokane . . .”
This upbeat song sets the fact-giving fun mood: want to know the year the Dome was built, how many state employees there are, where did the fountain come from? Here’s the song that’ll tell you with a kind of musical nod to that hoary old I’ve Been Everywhere Man in its listing of names (of places which aren’t the capital). A ballad The Land And The Water sung by Holly Graham (and arranged by Jim of Seattle with real instruments) pays tribute to the creation of Puget Sound, the volcanic Cascades (remember St Helens blowing up?) and local rivers.

If it all sounds a bit like an intermediate school play well it kind of is, but it is fun, tuneful (can’t say that about school plays), Jim’s arrangements are clever and it is certainly informative. (“You can’t buy Olympia Beer.”)

The beer issue is addressed later in Beer Town: “Leopold Schmidt rolled into town 1895, built his brewery in Tumwater . . . Olympia is full of microbreweries, well 80 . . . 83 bars serving beer and more in our town, according to David Scherer Water’s 2019 book”

It was also a Mill Town we learn.

With New Wave pop (People of the Water addressing colonialism), jaunty singalong country-pop (The Founding which starts “In 1792 the British came to Puget Sound”), spoken word passages, a crazy knees up (Bordeaux about a once thriving ghost town, cue faux French accents and accordion) and piano’n’vocal ballad Little Hollywood (the community burned down in 1942), this is quite some enjoyable journey.

This is the album to introduce you to architect Joseph Wohleb whose buildings – over 150, all over Olympia — inna Talking Heads/David Byrne style. And a touch of zydeco accordion on Mothballs And Mosquitos about a fleet of 185 ships mothballed for 26 years in nearby Budd Bay for 26 years.

And, for those who know the climate in this part of the world, the final track on the first disc will raise a smile, it’s eight minutes of rain and frogs at Dyer’s house.

(The first time I arrived at the airport near Seattle it was wet day in September and the bus driver said it would rain until April, “and that’s the way we like it!)

The second disc lifts off with the joyous Let’s Have a Parade! (the pet parade started in 1909, who knew!) and after the KGY station jingle we hear a discussion about the next song – recorded live – which is the true story of Dyer’s grandparents in the banjo and fiddle-coloured Grandma Caught The Shark (a huge basking shark, toothless but even so) recorded with the Oly Mountain Boys.

Then its the rocking Billy Frank Jr about a local Native American who was a Marine during World War II, fought the government over fishing rights for the local tribes (he won) and received the Presidential Medal of Freedom.

Here, as with every song, Dyer offers his own thoughts in the liner notes (“I never met him. So to me he is a kind of legendary figure: a righteous human who got things done”) and gives source material by way of websites or books.

This is more than just a vanity project and labour of love, it is local history in songs (of all kinds) and involved scores of musicians.

And yep, there is Jazz in Olympia (“it really happened”).

Tom Dyer moved back to Olympia in 2016 to discover the city’s history, much of which he never knew when growing up there. Like the story of the 1959 downtown train crash (the pop-rock Runaway Train) which – remarkably – only killed one person when it smashed through the downtown Union Pacific station, crossed 4th Avenue and destroyed half a city block. Not many albums celebrate local oysters, a conservationist/mycologist (The Ballad of Margaret McKenny, see below), the local college (A Bucketful of Weird about Evergreen State College which Matt Groening of the Simpsons, Sub Pop’s Bruce Pavitt and Macklemore’s Lynda Barry attended) let alone a notorious crime case involving the deputy sheriff, rape, pedophilia and local fears (Satan Made Him Do It).

Despite the darker songs, Olympia is a love letter to the state capital, celebrates Kill Rock Stars, the rain, clamming and so much more.

The final song is Olympia is My Home (“somedays I think you are my mother, holding me so warm and tight”).

This is a glorious, beautifully presented project and – remarkably — during the three years it took to create, Tom Dyer also ran his label (through Covid remember), delivered three solo albums and a True Olympians Christmas album.

“Team One, your time starts . . . now! How many microbreweries are there in Olympia, the capital of Washington state?”

You can hear and buy this marvellous project at bandcamp here

The Ballad of Margaret McKenny 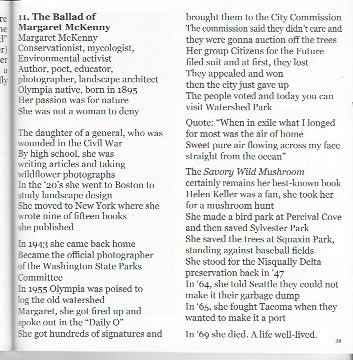