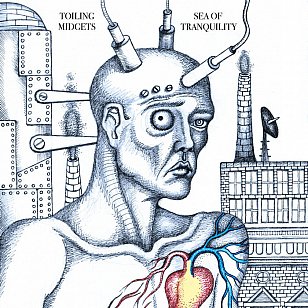 It has been about 15 years since we sat on the back deck of the Seattle home of musician Jeff Kelly and his artist wife Susanne.But we’ve never forgotten their hospitality . . . and the regular albums by Kelly and/or his band Green Pajamas (new or reissues) from the local label Green Monkey have just kept arriving.

Green Monkey is the project of Tom Dyer and we are happily on their mailing list for their non-grunge Seattle sound which can be punk/garageband, eccentric (there’s a new Jim of Seattle album coming apparently, yay!), singer-songwriter, Kelly’s move from sublime guitar pop-rock into a literate art-pop and much more.

Dyer’s own recent 1+1=? is nominally a “duets” album but he has redefined what that means and it’s strange wee cracker.

The great thing about most of these Green Monkey artists is – aside from Kelly and Dyer – we have never heard of them so just take the music as it comes.

At first glance – the band name and cover art – Toiling Midgets could be one of the more eccentric albums on the roster . . . but no.

Here are 10 mostly sub-5m instrumentals and vocal tracks (from the hitherto unknown, to us) Toiling Midgets, who have their origins in post-punk San Francisco and bands like Negative Trend and Flipper.

What’s here can be loosely located somewhere between a moody and slow freewheeling take on Bowie’s Berlin-period gloom instrumentals (Arachnid, A Bell) through buzzsaw guitars, psychedelic outreach (the more languid Grazing Stars), light industrial space-rock (The Bugs), melodic noise-grind in the manner of a world weary Neil Young with Crazy Horse (Ecco Mi) and a disquieting acoustic-based song (The Doctor Gets Cut Again).

The TM have been recording for 40 years – “16 or so EPs and albums” says the press sheet with admirable vagueness – and have enjoyed numerous line-up changes around Paul Hood and Craig Gray (both credited with guitars and keyboards here) and singer Ricky Williams.

Despite that, they are new to Elsewhere and — as with most Green Monkey albums — we are very pleased to hear it.

We are now passing it forward to you.

You can hear Sea of Tranquility on Spotify here